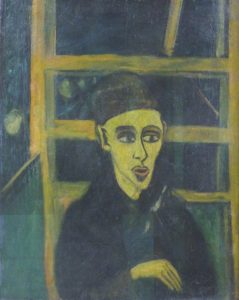 Who is the Boy in the tramway who was already a guest in the Erich Heckel exhibition in the Kunstsammlungen Chemnitz in 2016 and has since then also decorated the corresponding cover of the exhibition catalogue? Originally, the figure had been read as a „boy“ of Jewish origin in a moment of metropolitan lostness. It is possible, however, that the younger brother of Sidi Reha, Heckel’s later wife, was portrayed. The boy in the tram seems theatrical, as if he had been made up for a performance.

The composition was heavily modified by Heckel and also conservatively edited. A detailed examination and analysis of the condition was carried out by the restorer of our house in 2015. The picture from private ownership is now for sale. It is looking for sponsors and patrons in order to remain in the Kunstsammlungen Chemnitz as an acquisition.

Lush-white clouds of smoke from the locomotive leave a trail of clouds in the sky. The painter’s gaze is directed towards the southeast towards Dresden’s Marienbrücke. A realistic, even detailed representation does not interest him. Rather, his view of the city is a plea for a free painterly translation of a fleeting moment; still very much in the spirit of the Impressionists. On June 7, 1905, Erich Heckel, Karl Schmidt-Rottluff, Fritz Bleyl and Ernst Ludwig Kirchner founded the artists‘ group „Die Brücke“ (“The Bridge”). Against this background, the bridge motif of former Chemnitz high school graduate Erich Heckel takes on an almost programmatic character.

The view from outside:

I see a bridge. A train is running on it. I think to myself who or what is sitting in it.

All of a sudden the train gets faster. You can no longer hear birds and frogs sitting on the rose petals. Suddenly, you can’t see or hear the train. Now I hear the birds and I feel the sun. 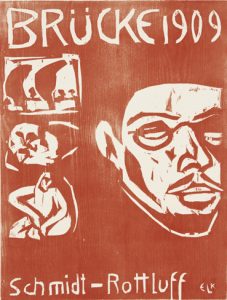 From 1906 to 1911, the artists‘ group Brücke (Bridge) published annual editions of original art for its passive members. The IV. Jahresmappe (Portfolio of a year) was dedicated to Karl Schmidt-Rottluff, who contributed two lithographs and an etching. Ernst Ludwig Kirchner designed the cover for the artist friend. He created a woodcut in red with the portrait of Schmidt-Rottluff. Next to the head, exemplary representations of the three main themes of the group’s art are shown one above the other: Landscape, Portrait and Nude. 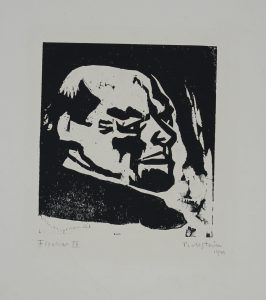 The woodcut by Max Pechstein is one of more than 700 graphic sheets that were confiscated from the Kunstsammlungen Chemnitz on August 19, 1937 as part of the „Degenerate Art“ campaign. Few of these works, such as the Fischerkopf (Head of a Fisherman), were later returned to the museum. In March 1947, works of „Degenerate Art“ confiscated from the estate of the art dealer Bernhard A. Böhmer in Güstrow on behalf of the German Central Administration for National Education in the Soviet occupation zone were seized and handed over to the Museum of the City of Rostock. Among these were also works of Chemnitz provenance. In 1957, 48 prints and one painting were returned from Rostock to the Kunstsammlungen. 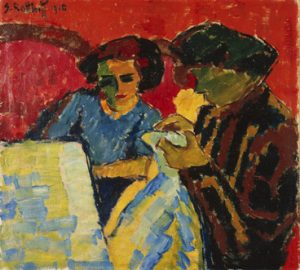 The painting belongs to the early interior representations of the artist. It shows two seated women, who are not drawn as individuals; even if they come from personal surroundings. A similar postcard from Dangast proves this. Therefore the sitter is probably the younger sister Gertrud Schmidt. The younger girl could be the then fifteen-year-old holiday acquaintance Elle Kohlsted (from Berlin). The decorative frame of the picture is of special importance. For the works created in Dangast until 1912, the local carpenter Wilhelm Voge added the frame moldings. Schmidt-Rottluff himself cut the abstract decoration and took care of the coloring. 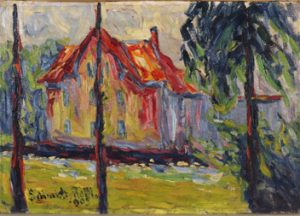 Schmidt-Rottluff had gone to Dresden in April 1905 to study architecture after graduating from high school in Chemnitz. The picture was taken in the summer and shows the family’s new two-storied apartment building close to his parents‘ mill. The style of painting is still a long way from what we today call the expressionist Brücke (Bridge) style. The experience of van Gogh paintings in November of this year, which had an influence on the painting style, is also still to come. The signature speaks of the self-confidence of the young Brücke artist. The simple name „Schmidt“ is no longer sufficient for distinction. For the first time the addition „Rottluff“ is added as an abbreviation. 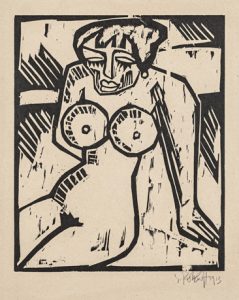 The female nude has a decidedly picturesque effect. The influence of Edvard Munch (1863-1944) is clearly noticeable. Already in 1906, the painters of the bridge had the first opportunity to see paintings by the Norwegian at the Sächsischer Kunstverein in Dresden. Of decisive importance was the encounter with Munch’s prints, which Schmidt-Rottluff was able to study in 1907 in the Hamburg collection of the regional court director Gustav Schiefler (1857-1935) and whose formal language and expression he greatly appreciated. 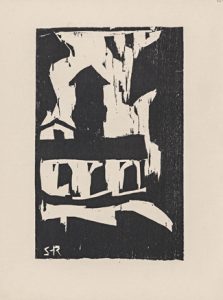 With the woodcut, Schmidt-Rottluff had found a medium that fulfilled his ideas of originality and expressive simple form. The wood became an experimental field for black and white contrasts without recognizable light and shadow modeling. Visible natural wood grains were included in the design as well as the traces of working with the tools. Villa mit Turm (Villa with tower) shows the residential house of the Wobick family in Dangast. The trees to the left and right of the villa are grouped together to form surfaces, and the tower dominates the foliage as an emblematic, arrow-like structure.