Starting on October 3, 2018, the Kunstsammlungen Chemnitz will be showing the two video works Again (2018) and On Fear and Education, Disappointment and Justice, Protest and Division in Saxony / Germany (2016 – ongoing) by the artist Mario Pfeifer, born in Dresden in 1981. The Kunstsammlungen is thus the first public museum to show the 2-channel video installation Again, produced for the Berlin Biennale 2018 and featuring the well-known actors Dennenesch Zoudé and Mark Waschke.

In this work, Pfeifer takes up an incident from 2016 in Arnsdorf, Saxony, when a fugitive was tied to a tree by four German men after a fight in a supermarket. The case was not heard in court because the fugitive died tragically in the meantime and the court did not see any public interest in prosecuting the four men. Pfeifer is reconstructing the incident with the help of investigative journalists and invites ten citizens with different flight and migration experiences to attend the reconstruction and subsequently explain their view of the incident. The artist shows the different perspectives on two projections, examines ethical norms and the relationship of citizens to the constitutional state, the fluid boundaries between self-defence, civil courage and vigilante justice. In doing so, he also invites the viewers of the video installation to form their own judgement.

Complementary to Again, the 9-hour video work On Fear and Education is shown, in which Pfeifer has nine people with different biographical and professional backgrounds answer the artist’s questions about the political, social and economic situation in Saxony from 2016. The starting point is the Pegida demonstrations and the question where which attitudes might come from. A complex and sometimes contradictory mood emerges before the eyes of the viewers, as Pfeifer fades out the questions, the names of the interview partners and other characterizations and focuses solely on the close-up of the face and the answers, without any further positioning or commentary. It is up to you to position yourself in relation to the expressed fears and anxieties, views and conclusions, and possibly to reconsider your own position.

Against the background of the demonstrations and riots in Chemnitz, the art collections invite with this exhibition to an exchange on the issues dealt with in the works, which are currently moving the city of Chemnitz and the state of Saxony, but also many people in Europe and beyond: protest between civil courage, the rule of law and self-justice, diversity and identity, fears of globalisation and educational opportunities, justice and security, xenophobia and struggles for distribution. In doing so, Mario Pfeifer does not work with binary juxtapositions, but is interested in the overlapping of opposing beliefs and ambivalent grey areas that correspond to the complexity of democratic negotiation processes. He allows people with different backgrounds and views to come up for discussion, which are otherwise rarely or distortedly heard in public discourse. Ambiguity characterizes the exhibition and consequently openness and not preconceived judgements.

The two works will be accompanied by lectures, discussion rounds and so-called live speakers, who will seek dialogue with citizens, but also contextualize the works and impart knowledge. The exhibition is to be seen as the beginning of an exhibition and mediation program that aims to stimulate a public discourse in Chemnitz through critical artistic positions, to create a dialogue – even controversial – with the citizens and thus strengthen civil society in Chemnitz and Saxony. Dates, topics and guests of the event program will be announced shortly.

On the occasion of the opening on October 2, 2018, 7 p.m., there will be an artist talk between Mario Pfeifer and the art historian and journalist Georg Imdahl, professor at the Kunstakademie Münster.

Again was commissioned by the 10th Berlin Biennale, co-produced by Mario Pfeifer Studio in collaboration with Rundfunk Berlin-Brandenburg in collaboration with Arte and KOW, supported by Medienboard Berlin-Brandenburg and the Cultural Foundation of the Free State of Saxony. For further information, see Again at http://www.aboutnow.info/ and About Fear and Education at http://www.ueber-angst-und-bildung.info/. 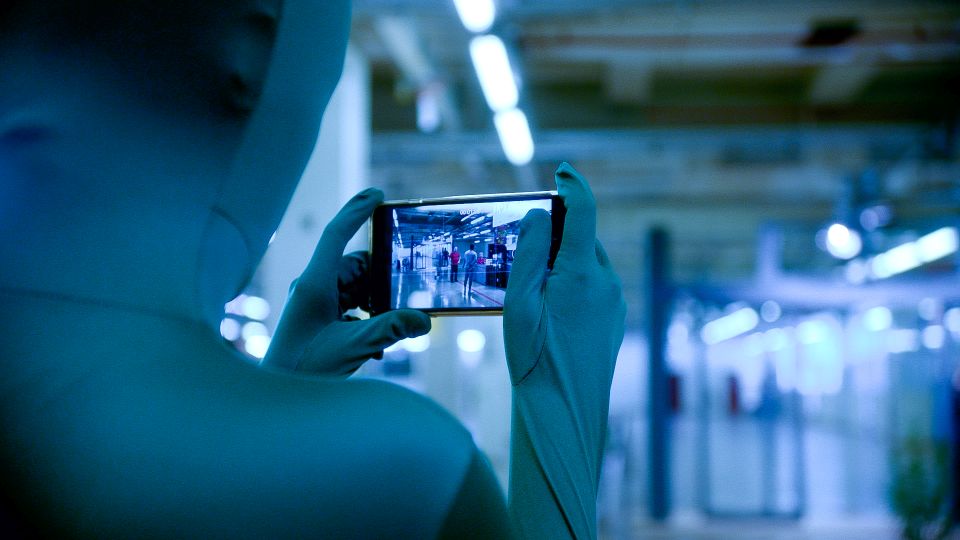