The Kunstsammlungen Chemnitz have reconstructed virtually one of their most historically significant exhibition areas: the respective rooms are on the 3rd floor and were designated as the Galerie der Moderne (Gallery of Modern Art), focussing on contemporary art and new additions to the collection.

In 1926, the Brücke-artist Karl Schmidt-Rottluff was commissioned by Friedrich Schreiber Weigand, the director of the Kunstsammlungen at the time, to design this exhibition space in a colour scheme that was innovative in its time. The artist and the director were to work together on a modern form of display. Works by Edvard Munch, Karl Schmidt-Rottluff, Wilhelm Lehmbruck, Ernst Ludwig Kirchner, Oskar Kokoschka and many more were then displayed/presentedon the paintedwalls. Many of those works were confiscated by the National Socialists in the course of the “Degenerate Art” campaign; in preemptive obedience the museum had already sold some of them. Later only a few of them found their way back into the Kunstsammlungen.

Having been damaged during the war, the rooms have only been partly preserved. Based on old groundplans and historical photographs, the exhibition space has been reconstructed virtually. The colour design by Schmidt-Rottluff has been approximately recreated in keeping with press reports of the time, the written memoirs of Schreiber-Weigand, and taking into account the range of colours used by the artist in his paintings at the time. Referencing different historical sources and the inventory books for the years 1926 to 1929, it can be plausibly verified for the individual rooms that these works were on show there. Given that works of art were repeatedly substituted or had to give way to new acquisitions, and also that the historical sources never reflected the complete exhibition, this virtual reconstruction does not reflect a particular point in time, but rather represents a summary of the Galerie der Moderne in the 1920s. 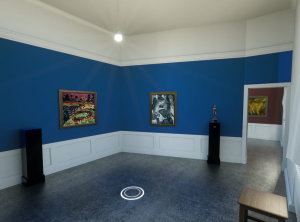 The publishers have made intensive efforts to identify all rights holders. If it should not be possible to notify rights holders in individual cases, we ask you to contact us. However, justified claims are settled within the framework of the usual agreements.