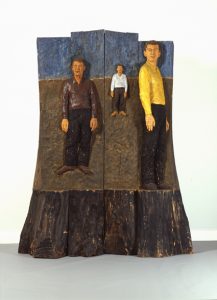 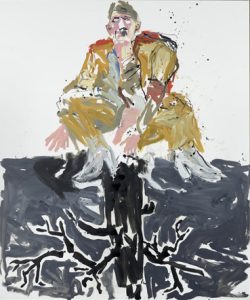 The motif refers to various predecessors that Georg Baselitz “re-mixed” in this painting in a new way: the painting Ein moderner Maler (A Modern Painter), created in 1966. The lower half, on the other hand, refers to the 1969 painting Der Wald auf dem Kopf (The Forest Upside Down). In that year Baselitz had begun to paint his motifs upside down; a technique that was to become his “trademark”.

His anti-heroes, which he created at the time, were neither compatible with heroic images of the past nor with the new heroic images of socialism and capitalism. On several occasions the artist created driving body colossuses with small heads, uniformed, traumatized men in destroyed natural landscapes. In Paint Painter, Baselitz also plays with an ambiguously obscene gesture of the squatting figure. 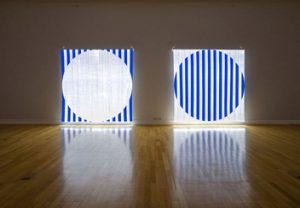 In the late 1960s, the French artist Daniel Buren established a system of firmly defined stripes that was to serve him as a conceptual tool for the exploration of images, materials and space. The stripes, set in different colors to white and always exactly 8.7 cm wide, have become his trademark. In 2013/2014 a series with geometric decorations was created, which can be perceived both as a wall curtain and as room lighting. The artist developed the carrier fabric made of glass fibers in cooperation with the Lyon-based company Brochier technologies.

Karl Otto Götz is one of the most important representatives of the Informel in Germany. From ca. 1950 onward, this style, as a counterpart to Abstract Expressionism in the USA, had a decisive influence on the art of the Federal Republic of Germany for almost a decade. His spontaneous, dynamic way of painting is essentially influenced by the painting technique he found in the summer of 1952: Paint applied to damp paste is torn open in a sweeping movement with the squeegee – a slider with a rubber lip. Like many of the artist’s work titles, the title Triphell refers to the Nordic language and mythology. The artist donated the painting as well as a relief, 142 lithographs and five design drawings for the glass windows in the staircase to the Kunstsammlungen between 1992 and 2004.

Jörg Immendorff was fascinated by the ability to illustrate historical contexts through the simultaneous depiction of different events and persons in pictures. He dealt with his environment and contemporary events in his paintings. In a large, mainly blue-black clutter and juxtaposition, individual persons, objects and contexts repeatedly come to the fore, such as the details of the German division in the upper left corner. 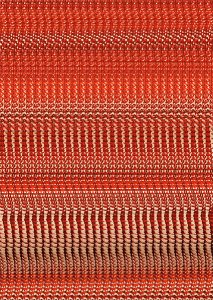 In the exhibition M+M. Fan der Menschheit (M+M. Fan of Humanity), which was on display in the Kunstsammlungen on Theaterplatz in 2019, the new works from the tessuti series took up the reference to the traditional textile industry in Chemnitz and especially to the textile collection of the Kunstsammlungen Chemnitz. To produce the series of works, both traveled to Venice, where they filmed the jacquard fabrics produced on old wooden looms in detail and then dissected the films into their individual, digital elements. By reassembling these film sequences, new patterns and structures were created, inviting the viewer to reflect anew on the luxurious fabrics and their use in the political and religious centers of power around the world. 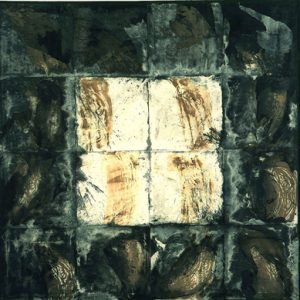 Formally, the painting consists of 16 square sheets of the same size, each of which is decorated with a single embossed figure. The papers applied to a canvas form a grid structure. The title Schweißtuch (Sudarium) refers to the Christian legend of Saint Veronica. She is said to have handed her veil to Christ on the way to crucifixion. The imprint of his face was left three times in the cloth.

The painting Schweißtuch belongs to the four-part cycle Einsiedel 5.3.1945. At that time Einsiedel was largely destroyed. As a child, the artist experienced the night of bombing in the air-raid shelter together with his mother. Schweißtuch is the last panel of the series and shows “the shroud over the victims”. 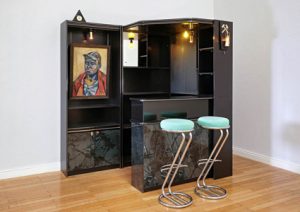 This sculptural ensemble was created in 2018 as part of a larger installation entitled DDR Noir. Integrated into the fictionalized bar made of second-hand furniture is the painting Zwickauer Kumpel (Zwickau Miner) by the painter Karl Heinz Jakob (1929-1997), a much respected artist in the GDR, who was also the artist’s grandfather. Unlike the furniture, everyday objects from the early 1990s in the style of postmodernism, which critically questioned the re-equipment of GDR everyday culture at the time of reunification, the painting comes from the grandmother’s collection. Shift change: old things were mucked out, new things were bought. Memories of the GDR in black and white or color? 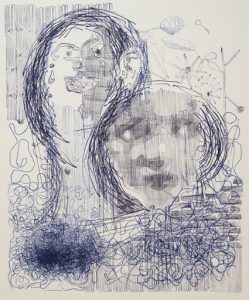 Markus Oehlen uses cords tacked onto wood as a tool with which he stamps his pictures. The printing plates are printed with black and blue acrylic paint on large-format nettle cloth. With this stamping technique he creates a special graphic texture and materiality on the fabric. His pictures look like fleeting doodles with a ballpoint pen. The exhibited work was created in connection with an exhibition of the artist in the Kunstsammlungen Chemnitz in 2018.

Markus Oehlen has been teaching in his home town of Munich as professor of painting and graphic art at the Academy of Fine Arts since 2002. 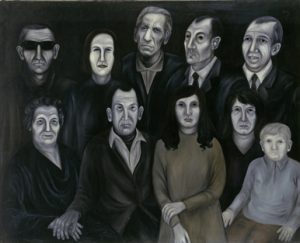 With the end of the Spanish Civil War in 1939, the dictatorship of General Francisco Franco began, which lasted until his death in 1975. For many Spanish emigrants, as well as Núria Quevedo’s parents with whom she came to Berlin (East) in 1952, the GDR became a long-time refuge. The group picture shows ten people: Men, women and a child arranged in two rows. Quevedo paints distorted character faces tone on tone. Her lighting control focuses on the head and hands. Wolf Biermann wrote a song to this painting, even before his expatriation from the GDR. In the Ballade von den Spaniern im Dresdener Exil (Ballad about the Spaniards in exile in Dresden), he describes the people depicted: “[…] Stand hair around a stone face of waiting gray, in the waiting room of the world revolution.”. 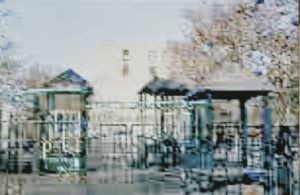 In this photo cycle, Olaf Rauh explored places of the game. He circles them with media of the digital age and shows them as an interface between social and virtual reality. The series was created in fall 2001 in the Lower East Side of New York City. Content information is reduced and formed into simple architectural models. He worked with a special Lambda high-gloss film that makes the surface of the picture solidify as if under a layer of plastic. 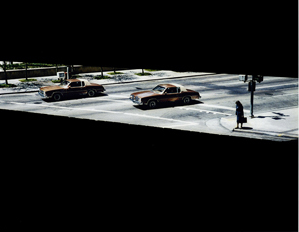 The famous filmmaker Wim Wenders began taking pictures during the shooting of the film Paris, Texas in 1983. “I was travelling alone in the American West, taking color negatives for the first time in my life.” The pictures taken at that time were later published under the title Written in the West.

The large-format print titled Two Cars and a Woman Waiting, Houston, Texas from this series is one of the few of his photographic works that shows people. Wenders’ photographs are always made in analog form and without digital post-processing. Only the image detail is staged by him afterwards.