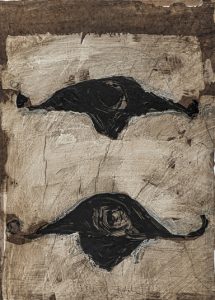 Rüdiger Philipp Bruhn lived as a freelance artist in Chemnitz since 1984. After his death, the Kunstsammlungen Chemnitz had the opportunity to make a selection of works on paper from his estate. 17 drawings and collages now enrich the inventory of the Graphic Arts Collection. Bruhn’s experimental work deals with individual experiences of being. His collaged drawings are built up layer by layer. Wafer-thin tissue paper is torn, crumpled, trimmed, reassembled and painted over with symbols, signs or letters. The result is concentrated abstract compositions full of poetry that look like meditation panels. 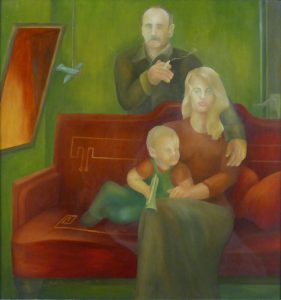 Barely sit in the same spot together.

It’s a lot of ups and downs.

Also because our child prevents us from caring enough for ourselves and pursuing our interests.

But there’s nothing wrong with that.

There are two of us. Have the chance to support each other.

But I don’t like being presented as the perfect family.

It seems too final and definite. Too rigid.

Where are our flaws? Where is our vibrancy? 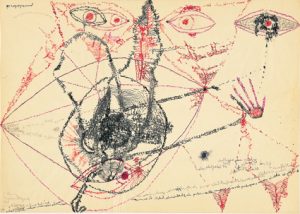 Carlfriedrich Claus dedicated the sheet Psycho-Allegorie to his memories of his friendship with an actress from the Annaberg Theater – not to the artist herself, nor to his past friendship with her. It is like a double distance that he puts between himself and what has happened, creating the possibility of reflection. The traces of black and red ink applied to both sides of tracing paper condense into two pairs of eyes and a long-fingered hand. They seem to be in a dialogue that is continued between front and back, between mirror writing and conventional writing. 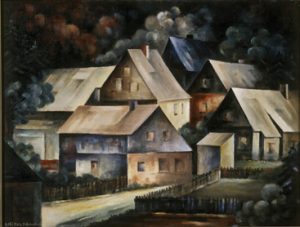 Back to a world I call home.

But something is different.

Something feels too familiar.

Too out of date.

I find myself falling into the role of an old me.

And yet, moving to another city was supposed to do just the opposite.

There I finally felt liberated from everything that prevented me from developing further in my homeland.

Slowly a new, improved version of myself grew up.

At least I thought so.

When do I decide to replace old with new for good? 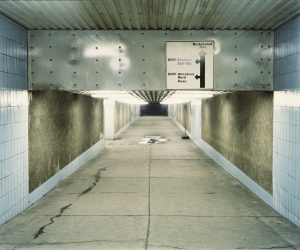 Where beginning equals end and exit can also be entrance, one has the choice to stick to the path given by dirty fluorescent tubes or to stumble uncontrollably swaying from one cold wall to the opposite one, in order to use the enclosed space completely with trembling hands searching for something like orientation.

The view from outside: Kilian Buchmann, 19, student 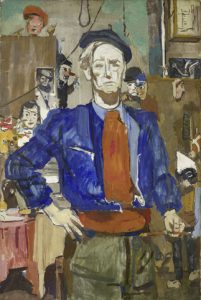 To stand by one’s own identity is a basic human conflict, which I could recognize in Bernhard Kretzschmar’s self-portrait. He depicts himself with detailed painted masks. On the one hand, they possibly symbolize his artistic work and creativity, on the other hand they form a metaphor for artificially staged versions of ourselves and are formed in a perfectionist way. At the same time, the artist’s upright posture seems self-confident and his facial expressions sceptical. It suggests that he was a critically thinking, opinionated person. 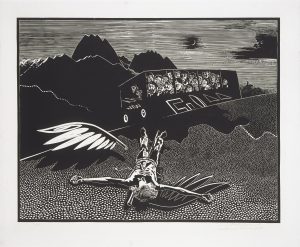 Wolfgang Mattheuer, co-founder of the Leipzig School, often uses ancient myths and biblical stories, interweaving their deep levels of meaning with the everyday world. The Icarus legend is a case in point. A backward sloping line divides the sheet into two worlds. In front Icarus, who wanted to go to the sun, has crashed and lies there like the crucified one. He is sensationally perceived by the passengers of the Icarus bus, the bus model that was ubiquitous at the time. Strange. The looks and the broken wing reach across the imaginary border. Thanks to Hartmut Koch’s donation, the Kunstsammlungen now possess the complete graphic works of Wolfgang Mattheuer.

The producers’ gallery Clara Mosch, founded in 1977 in Karl-Marx-Stadt, became one of the most important places of alternative art creation in the GDR. The group of artists, consisting of Carlfriedrich Claus, Thomas Ranft, Dagmar Ranft-Schinke, Michael Morgner and Gregor-Torsten Schade (since 1980 Kozik) became known for their spectacular art actions and gained a reputation as “non-conformist artists” during the GDR era. The actions were spontaneous or planned activities, which mainly took place in the open air in the context of so-called plenairs. Their actions were spectacular, provocative and unconventional.

All members of the former artist group are represented with works in the exhibition. Some of them were only created after the group was dissolved in 1982.

The view from outside: Maria Cuptior, 27, specialist for marketing communication 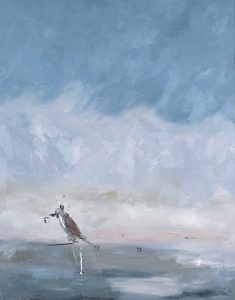 Once again the attention of the senses is focused on the infinity of the horizon, where dripping grey blue too often blends so unbearably beautifully with restrained pink, around the unchanging boundaries between the earth we walk on and the sky of which we will never be a part, to blur, the mind darkens in the face of the question of the impossibility of experiencing a daily experience, leaving only the tense hope that this thought will pass by weightlessly like a decelerated storm, threatening masses of clouds.

The view from outside: Kilian Buchman, 19, student 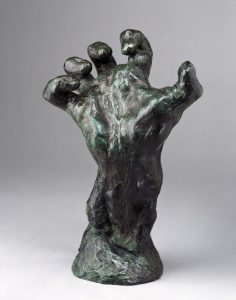 Rodin broke with solidified, idealizing traditions of sculpture and paved the way for modernism. He studied and admired the sculptures of Michelangelo and Phidias. While naked men and women walked through his studio, he modeled movements with enormous expressiveness, often only fragments of the human body, inspired by ancient sculptures that lack head and other body parts. One part contains the fullness of the whole. The exhibited hand shows the extreme emotion of an individual character. The breath stops, one tries to put oneself in the model’s place.

The artist Carsten Nicolai, who grew up in Chemnitz, has dealt with this sculpture in a series of 12 woodcuts. Two sheets from the series, which the artist donated to the art collections in 1993, can be seen next to Rodin’s Raised Hand. 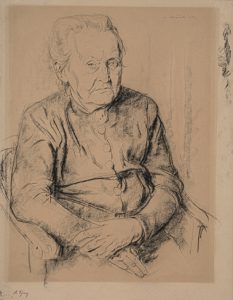 Will Schestak portrayed the painter and graphic artist Martha Schrag at the age of 82. Two years earlier, at the age of eighty, she had been made an honorary citizen of the city of Chemnitz. An honorary pension made it possible for her to acquire prints by artist friends in order to support them. She gave the works to the museum as a gift. In this way, for example, prints by Elisabeth Ahnert and Heinz Tetzner were added to the collection. Martha Schrag was a friend of the lawyer and collector Dr. Helmut Brückner. In 1977 the drawing came into the possession of the Graphic Arts Collcetion from his estate. The collector was also a friend of Will Schestak, who also drew for him during court cases. 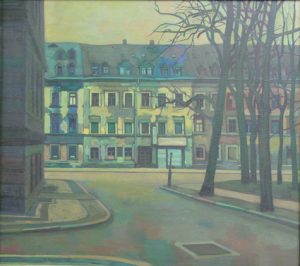 “I want to draw attention to the beautiful and interesting things in nature, the peculiar and poetic, the characteristic and special – be it a landscape, an architecture, a still life or an interior”, this is how Peter Schettler described his art in 1983.

The painter, who has been working as a freelance artist in Chemnitz since 1970, has also documented the changes in the cityscape with his Chemnitz motifs. The exhibited painting depicts the old residential buildings behind the opera house. Until the construction of the new technical building at the opera house and the blocks of flats towering behind it, rows of houses with old buildings were still located between Bismarckstraße, Brühl and Schillerplatz.

Christine Stephan-Brosch studied photography at the Academy of Visual Arts in Leipzig. In 1989, the Kunstsammlungen Chemnitz acquired a series of artist portraits of the photographer. Among them is a photo series of the Dresden painter and graphic artist Wilhelm Rudolph at the age of 75. Her portraits of artists from the 1970s paint a lively and authentic picture of the regional Karl Marx city art scene. In 1989, the artist described her intentions: “In photography, I abhor the deliberately ugly, the funny, the sought-after, the draped beauty and beauty, the obscene. I look for the true and natural, and in it there is nothing ugly and horrible, there are only pictures that more or less affect you or more or less appeal to you. 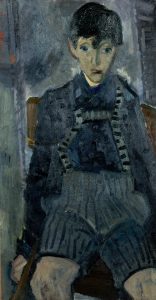 The portrait of the boy is shown in a large close-up view, his body stretching from edge of the picture to edge. He wears trousers with straps and a blue shirt, the pictorial space cannot be located. Tetzner lets the boy’s body end at his knees; these appear expressionistically distorted. He portrays him in a tense posture, not in his childlike lightness. Silently, lost in thought, he looks down. The artist has applied the paint quickly and thinly, so that in some places the canvas still shimmers through. 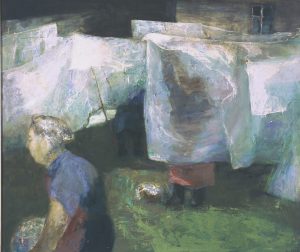 Axel Wunsch studied at the Academy of Visual Arts in Leipzig from 1963 to 1968 and has since worked as a freelance artist in Chemnitz. In Martha’s Laundry he picks up on a scene from everyday life, the drying of laundry outdoors. The women quietly carry out their work, moving in harmony with the white lengths of fabric blowing in the wind. The transparent surfaces, finely nuanced in color by the incident light, create a harmonious, almost sensual image of warmth, light wind and the scent of freshly washed laundry. 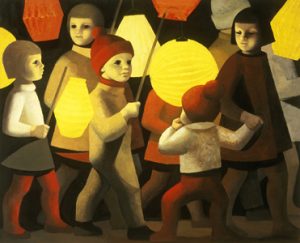 Lothar Zitzmann was appointed as a lecturer at Burg Giebichenstein in Halle in 1953 and headed the section “Scientific and artistic foundations of design” from 1970 to 1976. Characteristic features of his compositions, which appear closed, are the tendency towards strong simplification, the reduction to basic forms, and the plastic modeling of the bodies. The figures in this painting fill the entire pictorial space. Apparently moved by the running of the lantern, a sudden solidification can be felt, which has also spread to the faces of the children. This kind of depiction of movement, which seems to be stopped for a moment, is found in almost all of the artist’s works.