Thanks to the generous conceptual approach of the Staatliche Kunstsammlungen Dresden, the unique collection of Gothic Sculpture in Saxony has been on display at the Schloßbergmuseum in Chemnitz since 21 June 2009.

The fact that these impressive Saxon special forms of an epoch-making European style have since been on display in a single location is due not only to the generous attitude of the Staatliche Kunstsammlungen Dresden, but also to the Lord Mayor of Chemnitz, Barbara Ludwig, who immediately recognised the opportunity of a unique cultural enrichment for the city of Chemnitz. Without the energetic support of Heidemarie Lüth, Mayor of Culture of the City of Chemnitz, the realisation of the project would have been difficult.

Geographically, the objects on display come from the entire region of Saxony and cover the area between the western Ore Mountains and Upper Lusatia in the east. The predominantly sculptural part of the exhibition is complemented by several altar reredos and high-ranking works of late Gothic panel painting. Originating from the former Benedictine monastery in Chemnitz, the museum with its original sacral function is a worthy environment for the exhibits, which originally had a liturgical purpose in the church. The neighbouring castle church, built until around 1533, illustrates the original purpose of such furnishings in a place of worship with the flagellation column created there by Master H.W., the north portal of Franz Maidburg and the altar of St. Catherine in the choir.

The exhibition was set up on the ground floor in the preserved rooms of the monastery – chapter house, parlour, refectory and cloister. The majority of the sculptures come from the heyday of Saxon silver mining at the end of the 15th and the beginning of the 16th century, which also had a beneficial effect on the arts and culminated in the construction of late Gothic hall churches. Numerous sculpture workshops were responsible for the decoration of the churches, including the carved altars and figures of saints exhibited here, the most important of which were those of the Freiberg Cathedral Apostle Master, Master H.W. in Chemnitz and Peter Breuer in Zwickau. Among the sculptures presented are major works by these sculptors. The enthroned St. Nicholas, for example, which is considered an early work of the Apostle Master, belonged to an altar retable of Freiberg Cathedral that no longer exists.

The extremely high-quality sculptures of a Mother of Sorrows, a crucifix torso and a risen Christ, on the other hand, go back to the master H.W. or his immediate circle. A total of four sculptures by Peter Breuer are exhibited in the collection. Among them, the two Gersdorf figures of Christophorus and John the Baptist in particular attest to the artist’s extraordinary mastery. They were created after his apprenticeship in Würzburg, which he spent in the workshop of Tilman Riemenschneider, probably the most famous German carver of his time. Breuer was also in close contact with Hans Hesse, the most important Saxon painter of the late Gothic period, with whom he founded a joint venture. The epitaph of Stephan Gülden with the depiction of the Mother of God and Mary Magdalene, which comes from the hand of Hesse and is exhibited in the museum, is one of the major works of Saxon painting of the late Middle Ages.

Finally, the famous Holy Sepulchre, which is on display in the refectory, is by an unknown master and – created between 1480 and 1525 – is one of the few surviving examples of a burial casket for Christ in the form of a mobile magnificent shrine. The thematic content of the exhibited works includes the childhood, passion and sacrificial death of Jesus Christ and culminates in the depiction of the resurrected Son of God. The numerous saints on display, especially in the northern cloister, illustrate their assistant function as a link between the believing viewer and the instance of God.

In addition to the aforementioned late Gothic works, the collection also includes important objects from the High Middle Ages. These include the Otzdorf Madonna (c. 1160/1170) as well as architectural sculptures in stone, such as the late Romanesque tympanum from Elstertrebnitz. Altars and sculptures of the so-called Soft Style (ca. 1380-1430) are gathered in the Parlatorium, among which a resurrected Christ from Kamenz, the Topfseifersdorf reredos and the house altar of Dietrich von Schönberg deserve special attention.

with the Kunstsammlungen Chemnitz – Schloßbergmuseum 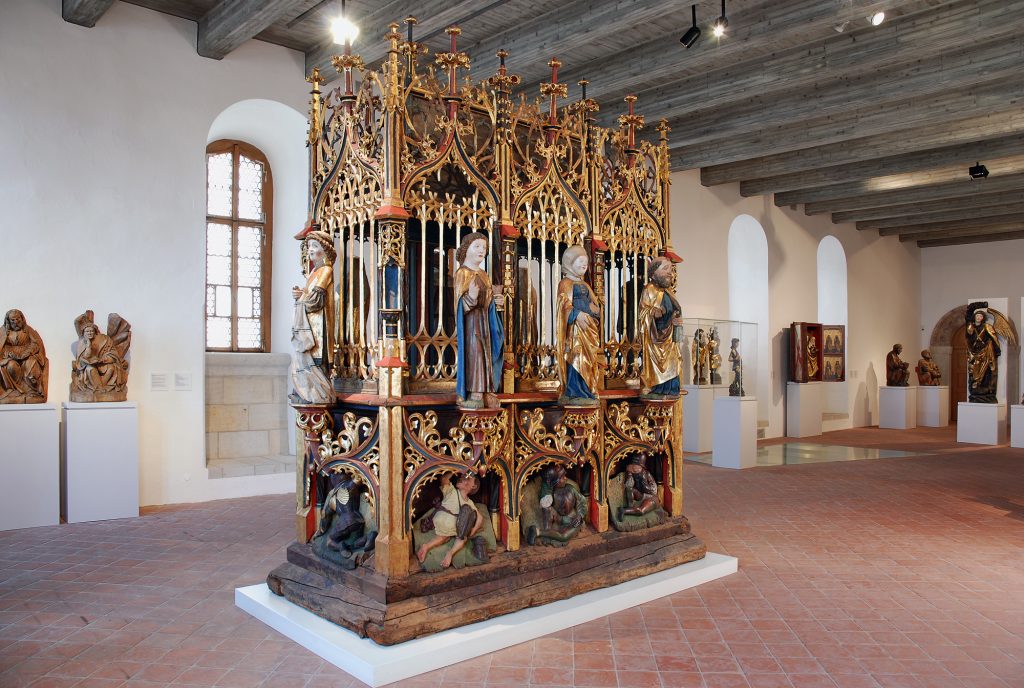 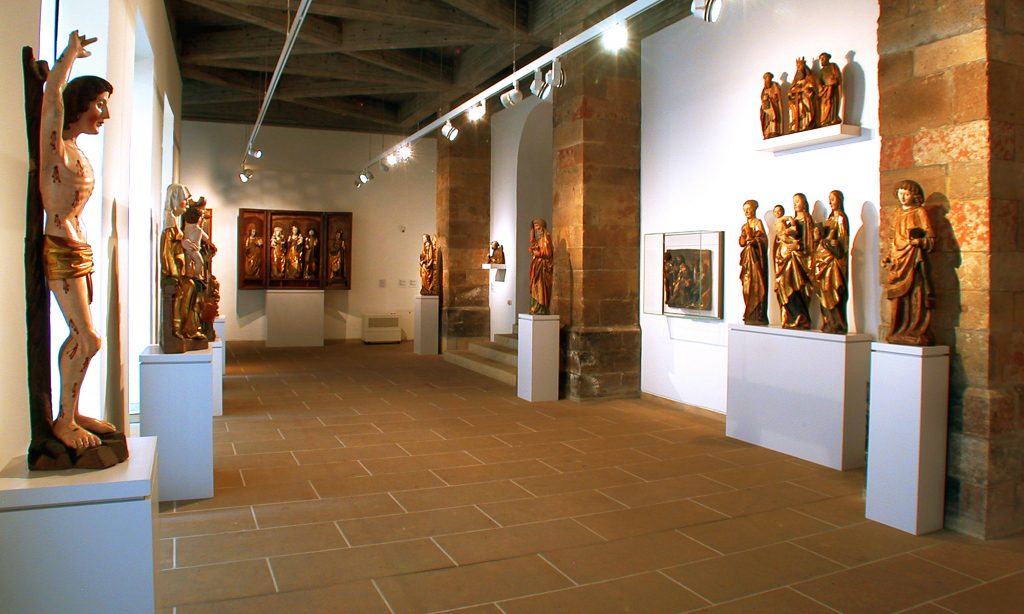 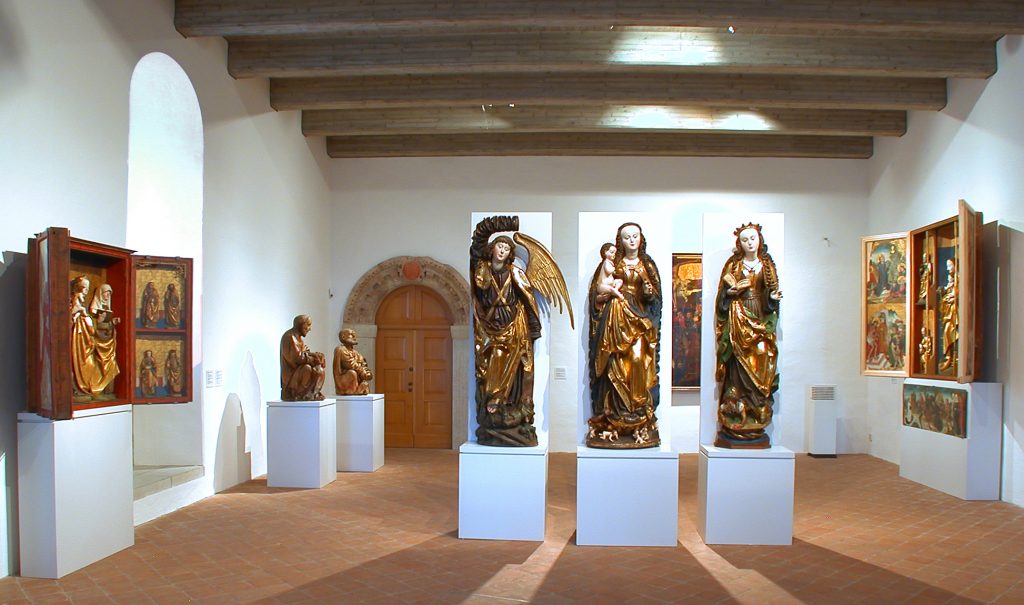 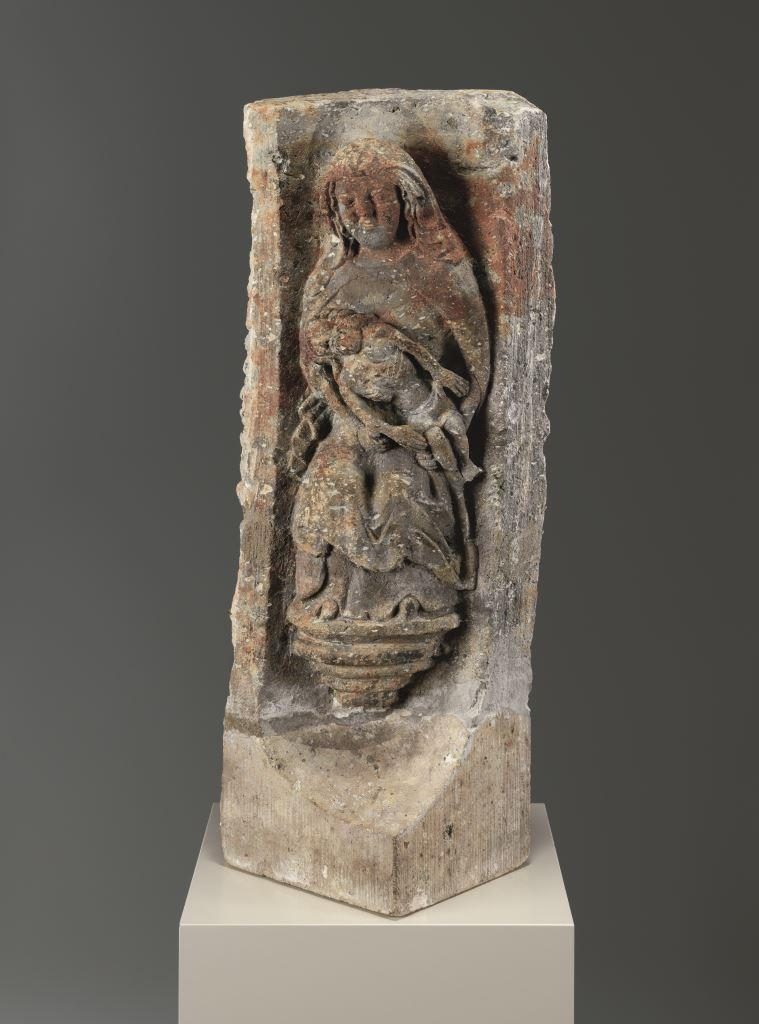 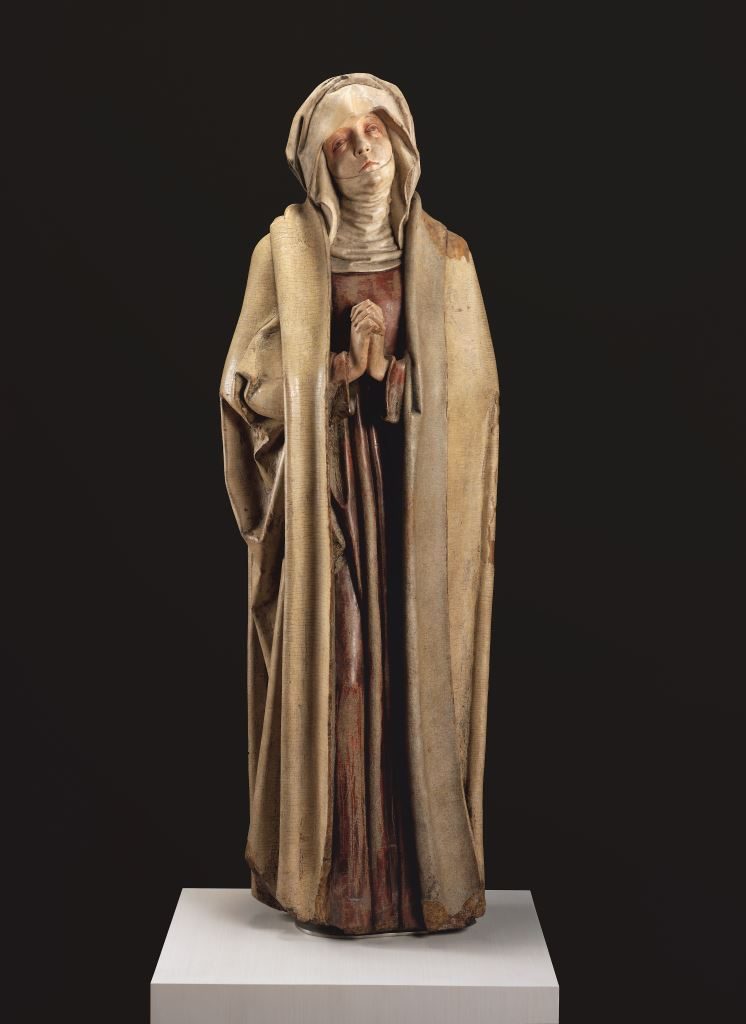