1919     Born in Rodez, France; has been greatly influenced by his native region and by Romanesque architecture, in particular the Abbey Church of Conques.

As of 1938          Having left for Paris at the age of 18, he studied in the studio of René Jaudon in preparation for attending the École nationale des Beaux-Arts, for which he was accepted in 1939; he would leave Paris again because he regarded the teaching at the academy as mediocre. However, exhibitions of works by Cézanne and Picasso which he saw in the Louvre made a lasting impression on him.

As of 1940          In July he was conscripted into the army, then discharged from wartime military service in 1941; moved to Montpellier, where he visited the Musée Fabre regularly. He registered at the École des Beaux-Arts, where he got to know Colette Llaurens. After the Germans occupied the South of France and Montpellier in 1942, he lived and worked in a vineyard under a false name so as to avoid compulsory work service (STO).

As of 1946          He and his wife moved to a Parisian suburb (Courbevoie) and he devoted himself entirely to painting, finally abandoning figuration of any kind in November of that year. Contacts with artists such as Francis Bott, Hans Hartung and others. He took a studio in Montparnasse.

As of 1948          Began to exhibit his works in Paris and in Europe. Because a painting of his was used as the poster motif for the Grand Exhibition of French Abstract Painting organised by Ottomar Domnick in Stuttgart and also shown other towns in Germany, Soulages became known there almost overnight. Group exhibitions followed in New York, São Paolo and Copenhagen. He devoted attention to the stage-set. First intaglio prints done in the Lacourière studio.

In the 1950s      Exhibitions and acquisitions for museum collections worldwide, including the Phillips Gallery, Washington, the Kootz Gallery, the Guggenheim Museum and the Museum of Modern Art, New York, the Tate Gallery, London, the Musée National d’Art Moderne, Paris and the Museo de Arte Moderno, Madrid. He took part in the first three »documenta« exhibitions in Kassel in 1955, 1959 and 1964. In 1957 Heinz Berggruen organised a solo exhibition of his graphic art in Paris. Extended sojourns in the United States and Japan.

As of 1960          His first museum retrospective exhibitions in Hanover, Essen, Zurich and The Hague. In the Museum of Fine Arts in Houston in 1966 he hung his paintings on wires spanned between ceiling and floor for the first time. As of 1961 he lived and worked alternately in Paris and Sète.

As of 1979          Began the group of works referred to as a »different« kind of painting and retrospectively designated as Outrenoir (Beyond Black), which he exhibited for the first time in the Musée Nationale d’Art Moderne – Centre Georges Pompidou in 1979. In 1986 he was awarded the Grand Prix national de peinture.

As of 1987          Began work on the 104 stained glass windows for the Abbey Church in Conques, until 1994. In 1989 he had a large retrospective exhibition in Kassel, Valencia and Nantes. In 1992 he received the Praemium Imperiale for Painting in Tokyo. In 1994 Pierre Encrevé published the first volume of the catalogue raisonné of his painterly oeuvre (further volumes appeared in 1996, 1998 and 2015).

As of 2005          Pierre and Colette Soulages donated an extensive gift of 500 works to the city of Rodez, thereby laying the foundation for the Musée Soulages scheduled to be built there. Other donations followed. The museum building was designed by the Spanish architects’ office RCW Arquitectes and was opened in 2014. In 2007, after donations to the Musée Fabre in Montpellier, a special wing was permanently dedicated to him. In 2015 he was presented with the Grand Cross of the French Legion of Honour.

Soulages is the first living artist to whom the Hermitage in Saint Petersburg devoted a solo exhibition (2001); to mark his 90th birthday in 2009, the Centre Pompidou organised the largest exhibition ever for a living artist; it later travelled to Mexico and Berlin.

2019      Pierre Soulages celebrated his 100th birthday in Paris with an exclusive exhibition in the Salon Carré of the Louvre. 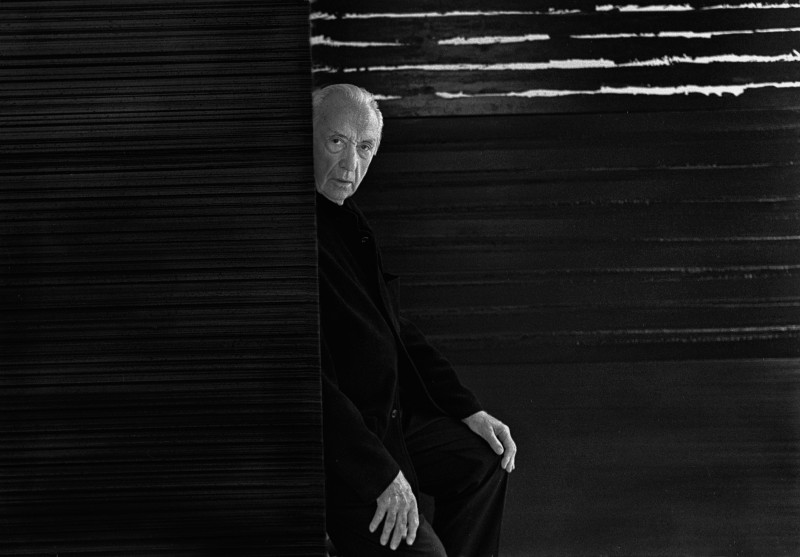