Today, on 1 April 2020, we are celebrating the 100th anniversary of the Kunstsammlungen Chemnitz as a municipal institution. Founded in 1920 – »in the morning light of the German Republic«, as Friedrich Schreiber-Weigand, the museum’s first director, put it in 1950 –, the Kunstsammlungen are not just the fruit of civic involvement on the part of the citizens of Chemnitz, but also a child of the Weimar Republic, with a democratic agenda that is always focussed on the present.

This year, in a major collection exhibition titled »In the Dawn of the Republic«, we will showcase a wealth of known and lesser known treasures and stories from the 100-year history of the Kunstsammlungen Chemnitz. Due to the coronavirus pandemic, the opening of the exhibition, originally planned for 30 May with a ceremony in the Chemnitz Opera House and a public party on Theaterplatz, will have to be postponed. We will keep you posted as soon as the new date is set. 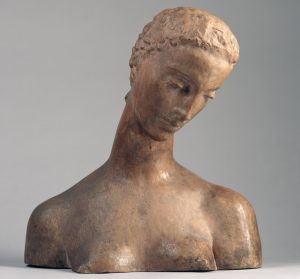 In 1920, on the occasion of the first exhibition in the newly founded Städtische Kunstsammlung (Municipal Art Collection), Friedrich Schreiber-Weigand wrote in the daily newspaper Chemnitzer Tageblatt that among the artworks presented are »two works by Lehmbruck which are still waiting for a sponsor […]«. One of these was the Bust of the Kneeling Woman (1912–1914). Without further hesitation, the Jewish dyeing-mill owner Georg Mecklenburg bought the work and gifted it to the museum that same year. To this day, the Bust of the Kneeling Woman is one of the most important sculptures in the holdings of the Kunstsammlungen Chemnitz.